Galbi is one of the most delicious Korean dishes. Normally, it is made from beef short ribs that are marinated and then grilled on the barbecue. Different types of ribs, like pork ribs, can also be used for this dish. Traditionally, galbi is marinaded to enhance its flavor before being grilled or sauteed. Marinades generally include soy sauce, sugar, sesame oil and fruit purees. 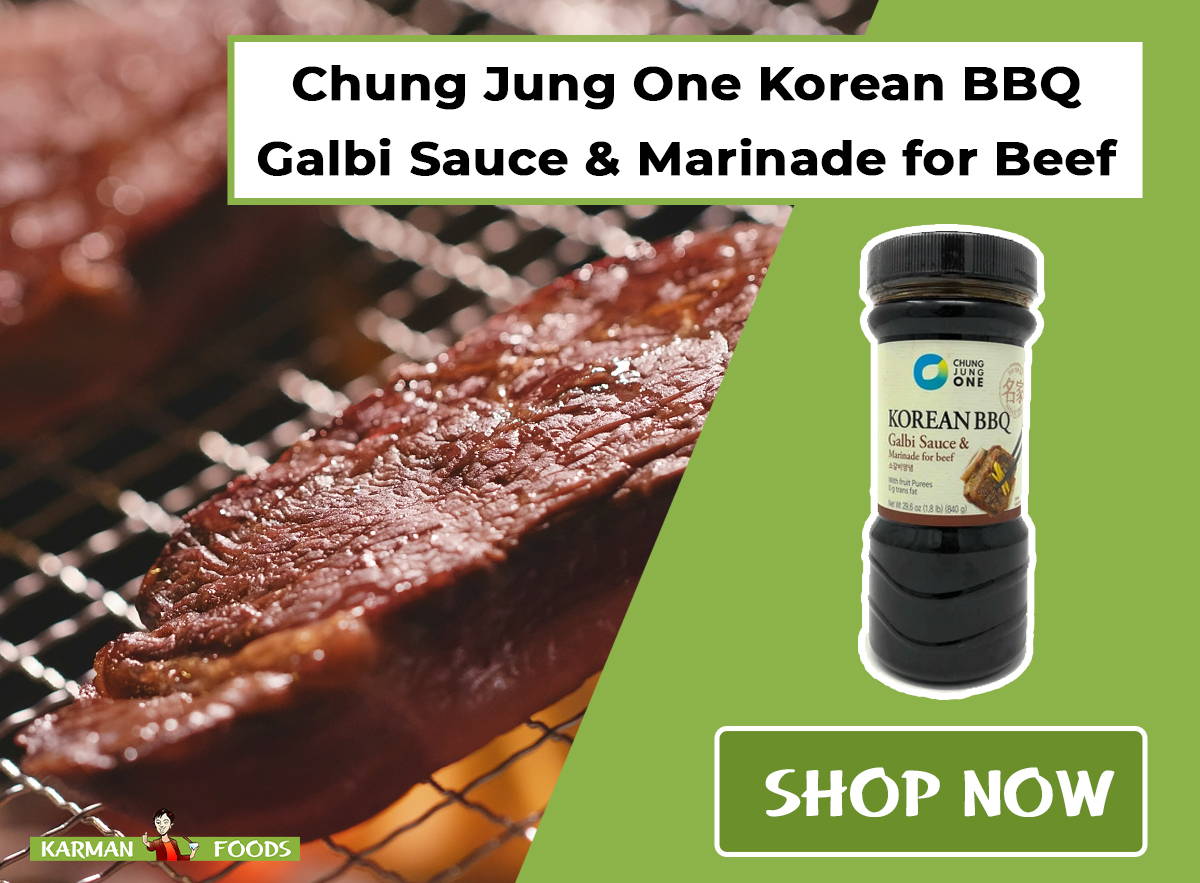 This marinade is made by Chung Jung One, which is recognized as one of Korea's original producers of authentic marin ades since 1984. And has received HACCP Certification from KFDA, which means it meets the standard requirements for food safety regulations. The flavor of this Korean barbecue marinade is sweet and slightly tangy.

The main ingredient is soy sauce, which gives the marinade a rich flavorful taste. This product also contains red wine from Spain, which adds flavor when marinating meats. One bottle can be used to make many meals. The ingredients also include several fruit purees, such as pear, apple, pineapple and kiwi. Thanks to these fruits, the marinade does a fantastic job at tenderizing beef short ribs, since they contain enzymes that quickly break down tough meat. The result is a juicy and delicious soft meat that will taste amazing after being properly grilled. Be sure to leave the meat in the marinade for at least half an hour for a good flavor.

The serving size of this marinade is one tablespoon, and there are 42 servings per container. Each serving contains 30 calories and has 370 milligrams of sodium, seven grams of carbohydrates and seven grams of sugar. This contains wheat and soybean, which are potential allergens. Before using the marinade, be sure to shake it well and to cook the marinated meat properly. Refrigerate the marinade after opening to preserve freshness and prevent spoiling. Before opening, it can be kept in a cool dry place and has a long shelf life of nearly two years.

To enjoy authentic Korean galbi at home, begin by marinating one pound of your favorite meat with four and a half tablespoons of marinade. Marinate for at least 30 minutes, but for the best taste you should marinate your meat overnight. This will allow the flavor of the marinade to infuse the meat and for the fruit purees to tenderize it. The marinade is primarily used for beef galbi, but is also great with any other meat, including chicken, pork, turkey and sausage. It can even be used as a vegetable marinade.

Now, I'm going to open this up and show you how it looks. I'm going to remove the plastic wrap on the outside of the lid. There is no seal underneath the lid. Here, you can see how it looks. This marinade is dark. It smells like soy sauce, onions and fruits. Be sure to pick up a bottle of this marinade, so you can enjoy the authentic taste of Korean barbecue at home. Get korean groceries at Karman Foods. This product is also available in our Asian Market, along with other authentic Asian products. Try it now!

Buldak Corn is a Hot Chicken Flavor Ramen with a hint of sweetness manufactured by Samyang. It is extremely convenient to ... READ MORE.

This rice porridge with mushrooms and vegetables is a quick and nutritious meal produced by CJ Foods. This dish is a specialty of ... READ MORE.